With an explosion akin to thunder, the train splintered into a thousand pieces, instantly killing the German soldiers inside. In the aftermath of the deafening explosion, no one noticed a group of men silently crawling back through an open field near the tracks, then vanishing into the nearby woods, the growing twilight reducing their movements to shadows.

One of those individuals was Solomon (Sol) Lapidus, a Jewish youth from Belarus, on his first assignment from headquarters. He was given instructions to place dynamite in such a way as to destroy the third car – his careful follow-through ensured that the train tracks located on the bridge were also devastated. His reputation for precision on assignments spread up the chain of command, and Sol became well-known throughout partisan groups as a demolitions expert.

Lapidus was born on May 10, 1921, in Minsk, Belarus. His mother was a Russian teacher, and his father ran the printing department for a newspaper. His immediate family spoke only a little Hebrew. In childhood, his main exposure to Jewish culture came from his grandfather, with whom he attended services every Shabbat. He was the middle child in a family of many siblings. His oldest brother, a well-known musician, was drafted into the army to entertain troops all over the world, and once performed for the Queen of England in London.

Lapidus did not come to be a demolitions expert through sheer talent alone. Like many other Polish children, before the war, he attended camp every summer. However, since Poland knew that a war was bound to break out sooner or later, many of their camp activities actually provided youth with specific military training. He chose to learn demolition by cable, which came in handy for his first assignment as a partisan. Sol and his wife after the war
Lapidus was drafted into the Red Army on May 10, 1941, his twentieth birthday. Less than two months later, on June 22, 1941, Germany broke the non-aggression pact with the Soviet Union and invaded. The German offensive was quick and powerful, and despite the assurances of Stalin’s propaganda, it overpowered the Soviet forces in the western regions. Much of the Red Army scattered throughout the countryside – later regrouping as partisan units. For three weeks, Lapidus ran from the German soldiers with only the clothes on his back, headed east towards Smolensk. He was eventually caught and put in a POW camp in the woods near the Russia-Belarus border.

He languished in the prison camp with hundreds of Red Army POWs until August of 1941, when he and a group of others, including his commanding officer, managed to escape with the aid of local peasants, who provided wire cutters and instructions on which direction go in order to escape. Hours before dawn, Lapidus crawled on his stomach to the relative safety of the woods with seventeen others. During his escape, he found himself in the middle of the crossfire between the Wassof partisan group and the Germans and was wounded. Although he had only the use of a straw to cleanse his bullet wound, he recovered without complications.

Escaping deep into the woods, Lapidus went on to join the Chokulov partisan group, hiding his Jewish identity because of the anti-semitism that existed within the ranks. The partisan life was primarily a means of survival, but the group also participated in a number of attacks on railroads and other targets, earning Lapidus respect within the partisan ranks for his demolition expertise.

Lapidus’s partisan encampment was located near the forest where the Bielski partisans had set up camp. Because the Bielskis sometimes worked with the Soviet partisans, Lapidus had a chance to visit the camp, where he met Tuvia Bielski for the first time in September of 1942. They quickly became friends, and Lapidus valued the kinship that an all-Jewish partisan unit provided him – after all, he could not even reveal his Jewish identity to his own otriad.

Lapidus remembers Tuvia as someone who valued the integrity of every member of his group and did not discriminate against anyone based on their gender or age. He had innate leadership abilities and knew how to raise the morale of his partisans. “[Y]ou're not doing it for yourself, you're taking nekamah1 for someone else who got killed,” Tuvia once told his group. The two met at least once a week and collaborated on many joint operations.

Inspired by his love of performance arts, Lapidus organized an entertainment group made up of a dozen partisans who sang, danced and played music for nearby partisan camps. The Soviet command granted them permission to perform; the presence of partisan entertainers in the region could easily be turned into beneficial propaganda. The performances were lengthy affairs lasting one and a half to two hours. The entertainers’ reputations preceded them; they became so famous that wherever they went next, a platform stage would be awaiting them, built by the hosting otriad.

Lapidus’s younger brother fought with him in the partisans. Unfortunately, on one occasion, his brother became separated from his group during a mission and was killed by enemy crossfire. Deeply affected by this incident, Lapidus withdrew from assignments and instead used his demolition expertise to train peasants who had recently joined as partisans.

Lapidus met his wife Ruth towards the end of the war at a concert in Lida. He already had a girlfriend whom he planned to marry, but quickly ended it after meeting his future wife, falling for her beauty and good nature. Ruth had been in Asner's partisan group, but later she joined the Bielski group. When Lapidus got sick with typhus, and his doctor passed away leaving him without the proper care, Ruth nursed him back to health and saved his life.

Looking back on his time as a partisan he states “[we] prove[d] that we are people that survive[d] because we [fought] for it, not [because] somebody else was fighting for us.” 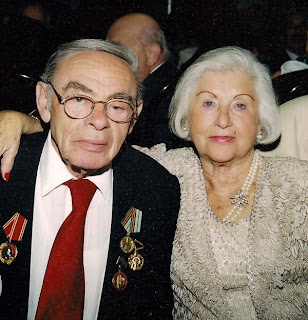 Lapidus received many medals of honor for his bravery as a partisan, including the Order of Lenin, one of Soviet Union’s most prestigious honors. He immigrated to the United States, with Ruth where he became a successful businessman and raised his children.

Solomon Lapidus (z''l) passed away in December 2017. May his memory be a blessing.

Learn more about Sol, and watch his video testimony on JPEF's website.

Posted by JPEF Staff at 9:00 AM No comments:

In November of 2008, Defiance director Edward Zwick took these photographs of surviving Bielski partisans at the screening of Defiance at the Museum of Jewish Heritage. We have posted some of these on our Facebook page earlier, in conjunction with our tribute dinner honoring partisans from the Bielski brigade and their 3rd generation descendants. Here is the entire set:

Posted by JPEF Staff at 4:43 PM No comments: