Teacher Tips for Remembering the Jewish Partisans on Yom HaShoah

Remembering the 20-30,000 Jews who fought back against the Germans as partisans is a profoundly meaningful way to pay tribute to the 6 million Jews who ultimately perished in the Holocaust. To this end, JPEF provides a double-sided supplement for remembering resistance on Yom HaShoah called “Putting the Gevurah Back into Yom HaShoah.” (www.jewishpartisans.org/resist)

Ilona Shechter, a teacher at Gideon Hausner Day School in Palo Alto and United States Holocaust Memorial Museum Mandel Fellow, has organized many memorials during her career. She shared with JPEF staff the following tips for Jewish partisans-centered activities:

Show the JPEF Short Film Introduction to the Partisans

“If you only do one thing,” states Shechter, “show this film (available free at JPEF’s website at (www.jewishpartisans.org/films.) I have shown the film to (as young as) 5th grade and they loved it. For them, Holocaust meant death and dying and destruction. Watching Jews blowing up trains; this was the absolute best. The kids have responded very well to it. They asked very intelligent questions: Where did the Jewish partisans get all their supplies from? Who helped them and who didn’t?”

Shechter continued, noting that incrementally adding new partisan material each year makes for highly effective lessons. She stated, “When the students get into 8th grade, I show them all the rest of the films. Today I showed them [JPEF’s] ‘Women in the Partisans.’ You could have heard a pin drop on the carpet. It’s an excellent teaching tool.” Ilona also recommends using the accompanying study guide when showing the film.

“A simple, effective observance is to light 6 or 12 candles for the 6 million Jews (and the 6 million others considered “undesirable” by the Germans) who perished. Students take turns lighting candles, each remembering a different group: ‘This is a candle we light for the Jews who died in the death camps of Poland…This is a candle we light for the Jewish partisans who fought in the forests of Europe,’ etc.”

Talk with your students

A little information can stimulate a class-worth of conversation. Shechter shared, “A young teacher in Montana showed JPEF film clips to his class the first year he did it (taught about the partisans.) There was this stunned silence in the classroom. He said ‘What’s the matter?’ The class answered, ‘I bet there were more like that, but most didn’t get the opportunities, or realized that they were all going to be killed.’ That was a profound thing for kids to say. To realize that most Jews were starving and deprived and would have fought back if they could.”

“There’s nothing like having pictures of 12 and 14 year old partisans up in school, showing what young people can do…that age really was not material,” states Shechter. For printable photos, go to the homepage of JPEF’s website and click on image galleries under the Explore tab. You can also click the Image tab on any partisan profile.

Use Poetry, Music, and Memoirs

“A lot of poetry- poetry written by partisans- and memoirs, songs, and music…There’s a whole CD on partisan songs-playing music while partisan poetry is read…..You could do an entire Yom HaShoah v’HaGevurah entirely on partisans. It could be very effective.” Begin your search for this material by Googling “Jewish partisans song poetry memoir.”

Also, review a short poem about a Jewish women partisan on the last page of the Women in the Partisans study guide on the JPEF website, www.jewishpartisans.org/women

Ilona Shechter articulated why she feels it is important to teach about the partisans and other resistance by concluding, “On Yom HaShoah, most people forget about the Gevurah (strength or heroism.) Everyone talks about the Warsaw Ghetto uprising. But there was more. It blows people away when they see that.”

Posted by David Kaplan at 1:02 PM No comments: 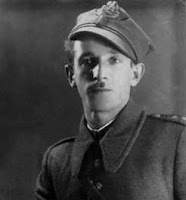 JPEF: What do you think is important about Yom HaShoah v’HaGevurah?

Blaichman: People who wanted to remember the Holocaust created Yom HaShoah. They knew that they had to teach future generations the important lessons from the Shoah—so that it would never happen again.

Blaichman: Jews should never forget that they are Jews. The day we were liberated, we thought that Fascism and Nazism were buried. Today, we see that antisemitism is still all around us. It is important for us to remember—and youth should be taught—that Jews fought and will continue to fight against antisemitism, bigotry, and oppression.
JPEF: As a Holocaust survivor and a Jewish partisan, you have many days of personal reflection and remembrance. How is Yom HaShoah v’HaGevurah different?

Blaichman: I am very grateful that there is a day to remember what happened during that time—it is a good thing that the memory stays alive for generations.

JPEF: Any further reflections about this memorial?

Blaichman: Most importantly that Jews can defend themselves. The only way we survived as partisans was that we had the courage to fight back. Growing up in Poland, we were never taught how to survive. We had to have courage—early on we accepted our fate. It is important that people know that when I was fighting as a partisan, it was as a Jew—I am a Jew, I was fighting as a Jew, and I survived as a Jew. Jewish students, especially, should be proud to be Jewish and know that there were Jews who fought back and survived.

To learn more about Frank Blaichman, please visit his biography.

Posted by David Kaplan at 3:12 PM No comments: 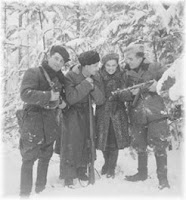 JPEF: You must have many days of personal reflection and remembrance. How is Yom HaShoah v’HaGevurah different?

Schulman: This is the day when most people remember the Shoah. For me, it is not that different than any other day because I think about it all the time. Every day is Yom HaShoah.

Schulman: That there was a resistance and Jews did not go like lambs to the slaughter. Jews resisted—they fought back!

JPEF: What do you think is important about Yom HaShoah v’HaGevurah?

Schulman: I think it is important for future generations, not those of past generations who remember it quite clearly. As I said already, for me one day is not any different than the other—it is my responsibility to remember it and speak about what happened every day.

To learn more about Faye and the photography exhibit, please visit

Posted by David Kaplan at 3:09 PM No comments:

Email ThisBlogThis!Share to TwitterShare to FacebookShare to Pinterest
Labels: Faye Schulman, Jewish resistance, Pictures of Resistance, women in the partisans

Posted by Mitch Braff at 1:10 PM No comments:

JPEF was fortunate enough to be acknowledged as one of the top 50 most innovative Jewish organizations for four years by Slingshot, a program of the Andrea and Charles Bronfman Philanthropies. When we received recognition of this in October, we were also awarded a $40,000 grant and given a Flip camera to record programs and happenings for a midterm grant report -- vs. having to write one. This is the product of those Flip clips and takes the viewer to Zurich, Tennessee, California, Florida, and Washington DC where we ran programs that will ultimately affect tens of thousands of people. Having a little film/video background we had to edit it a little, add a little music. FAR from polished, but will give a five minute glimpse of what we have been up to from Oct 2009- Feb 2010.
Posted by Mitch Braff at 1:04 PM No comments: