Their mission was supposed to be easy – armed with a list of addresses, small teams made up of men from the SS and one Danish guide were supposed to fan out across Copenhagen and northern Zealand. They were tasked with rounding up Denmark's 8,000 Jews who would be at home with their families observing Rosh Hashanah. They planned to send the entire population to Nazi extermination camps across Europe.
The second day of Rosh Hashana fell on October 1st, 1943, roughly a month after the resignation of the Danish government – the last political obstacle between the citizens of Denmark and Hitler’s plans to implement the “Final Solution” and eliminate all Danish Jews.
In most cases, however, the round-up teams found empty houses and apartments waiting for them. The entire Jewish population had been warned days in advance to go into hiding and to spread the word about the planned deportations. By the time the SS began knocking on doors, most of the country’s Jews were either in hiding, or on their way to the coast. Most eventually made it safely across the Øresund strait into neutral Sweden. The majority of Denmark’s Jewish population escaped Nazi persecution, and their casualties were the lowest in all of occupied Europe. How were the Danes so successful in such a blatant act of resistance against the Nazis?

Because of the tolerant and inclusive climate Jews have enjoyed in Denmark since the Napoleonic Wars, Danish society, by and large, considered Danish Jews to be Danes, first and foremost. Danish Jews were granted full citizenship rights almost a hundred years prior to World War II. The Danish monarch, King Christian X, defiantly insisted on visiting the central synagogue in Copenhagen even after Hitler came to power in Germany, becoming the first Nordic monarch to visit a synagogue. (However, the popular tale of the king wearing the yellow star in solidarity with Danish Jews is a myth1.) As a result of such a social climate, the people of Denmark, and the Danish Underground, naturally rallied together to hide and smuggle their fellow citizens without any friction. Many smugglers did not charge for passage, and even the Danish police helped in the rescue effort.
Germany was reluctant to pressure the Danes for several reasons. First, the Nazis hoped to promote occupied Denmark as an example of a “model protectorate” to the world. Second,Danish meat and dairy provided sustenance to over 3 million Germans. Upsetting this balance would have had negative political consequences for the Reich. Even ideologically-committed Nazis saw the need for moderation, although increased activity by the Danish Resistance, and the grim news from the Eastern Front, made moderation untenable to Hitler by mid-1943. Although the orders came from the very top, at first the Gestapo did not allocate enough manpower for the mission, and the unenthusiastic German army and navy units called in to support them often turned a blind eye to escapees. 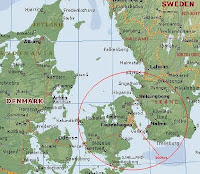 The effort to rescue Denmark's Jews was successful, due in large part to the efforts of ordinary citizens, but prominent public figures also made significant contributions.Georg Ferdinand Duckwitz, a German maritime attaché and a secret moderate, had lived in Scandinavian countries for many years and enjoyed a warm relationship with Denmark’s elites. On September 28th, he leaked word of the planned deportations to the leader of the Social Democrats, and the news spread across all levels of civil society. Nobel physicist Niels Bohr played a part - he petitioned the king of Sweden to make public his offer of asylum to Danish Jews shortly after he himself was smuggled into Sweden en route to the US to work on the top-secret Manhattan Project. Though it is uncertain how this plea factored into the decision, Sweden announced its offer of asylum on the 2nd of October.
In the end, the Nazis managed to deport only around 450 Jews; most were sent to Theresienstadt, where they remained until the end of the war. Because of pressure from Danish authorities, and frequent visits from the Red Cross, the Nazis accepted packages of food and medicine for the prisoners. More importantly, they were persuaded not to deport the Danes to the Auschwitz extermination camp – a fate that would have meant certain death. An estimated 120 Danish Jews lost their lives in the Holocaust.
The entire Danish Underground was awarded the status of “Righteous Among The Nations”. In 1971, Yad Vashem honored Duckwitz with the same title.

1. The myth originates in pro-Danish PR campaigns of the time to counter criticism that Denmark did not adequately resist the occupation – even though to do so militarily would have been tantamount to national suicide. The effort enlisted the help of Edward L. Bernays, father of modern PR, godfather to the term "Banana Republic", and a highly controversial figure in his own right. (It is said that Nazi arch-propagandist Joseph Goebbles was an ardent student of Mr. Bernays and had memorized many of his books, despite the fact that Bernays himself was Jewish.)

Posted by JPEF Staff at 8:00 AM No comments: