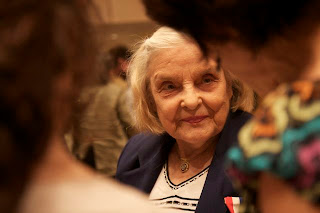 "Pictures of Resistance" is an international success!

It’s hard to believe that this incredible woman is 90 years old. I am honored to have had the opportunity to spend some time with Ms. Schulman when she travelled all the way, by herself, to Israel for the opening international premiere of “Pictures of Resistance” last November.
I was struck by how I could still see that beautiful girl, that one who pushed herself beyond the limits of self - fighting the Nazi’s, that girl who was afraid of blood but helped endlessly as a doctor’s aide in the forest ,and fearsomely documenting the experience. That young woman radiates through her being.
One of Ms. Schulman proudest accomplishments remains the three lives she directly saved including the young Jewish girl who was eight years old whose life she saved by negotiating for hours with her commander to allow the child to serve in the partisan unit as her aide until she could be safely airlifted out of the woods to relatives in Moscow.


There is so much to update on “Pictures of Resistance” since our last blog post. “Pictures of Resistance: The Wartime Photography of Jewish Partisan Faye Schulman” is one of the best ways that JPEF can reach thousands of people in communities all over the world, some of whom have never heard of the Jewish partisan experience. The images are a visual testament to the thousand of Jewish boys and girls who heroically fought against the Nazi’s and shatters the myth of Jewish passivity during the holocaust.
“Pictures of Resistance” has exhibited in nine cities around the world including Zurich, Switzerland and Tel Aviv, Israel. It continues to draw international acclaim and media attention, bringing JPEF’s work to more and more communities. The exhibit is now in Santa Barbara, California 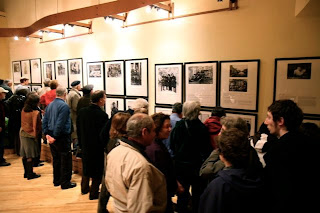 ( Captivated viewers at "Pictures of Resistance" in Berkeley, CA)


The event was a smash hit and covered in the Jewish Week. Many longtime JPEf supporters and board members coming out to view the incredible photographs they had heard so much about. 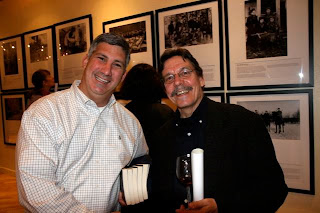 ( JPEF Founding Board Member Michael Grossman and board co-chair Paul Orbuch in Berkeley)
Yom Hashoah 2009 “Pictures of Resistance “ had both a national and international viewing, Internationally a selection of the photos were on view in Tel Aviv at a special event for survivors, partisans , their children and children’s children sponsored by “Second Generation".
Nationally the exhibit was on view at the Columbia/Barnard Hillel. Faye was the keynote speaker to a standing room only audience at the closing reception.
Simon Klarfield, Hillels’ Exectuive Director had this to say about the exhibit,
“The vital history of the Jewish Partisans has to be taught to the ‘next generation’, and the exhibit allows for students to raise essential questions regarding heroism, justice, ethics of war, the power of a few, and the list goes on” 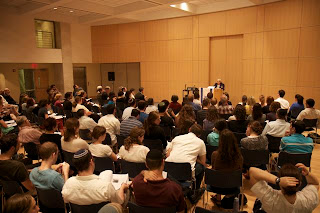 (Faye speaking to a standing room only crowd at Columbia University)
Most recently “Pictures of Resistance” was in Memphis, Tennessee. Barb Gelb, Temple Israel’s Director of Education, reported, “Everyone’s reaction has been positive – just blown away by the exhibit. Many people have never heard of partisans before. Our students have learned so much and our teachers have learned so much, especially from the training workshop. Our sisterhood had an amazing presentation. We are thrilled to be able to participate in this.” While in Memphis received some press including this article in the Commercial Appeal
Some of the most exciting things with the exhibit have been happening overseas. This summer at version of the exhibit was translated into Polish and is showing at the Galicia Jewish Museum in Poland. 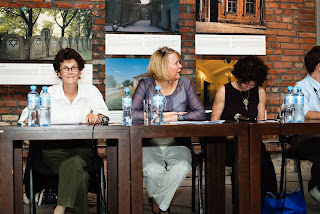 ( Curator Jill Vexler in Poland with "Pictures of Resistance" )
A new donor brought JPEF to Zurich, including Aron Bell (last surviving
Bielski brother) and our photo exhibit. The exhibit was made just for this one night's screening and showing, and brought in from Poland where we had it fabricated, then driven 12 hours to Zurich for the evening. Mitch ran a Q& A to a sold out crowd of 500 people and then a private tour of the exhibit with many key people in the Zurich Jewish community . We now have a second copy of the exhibit to begin touring the US in 2010!!! 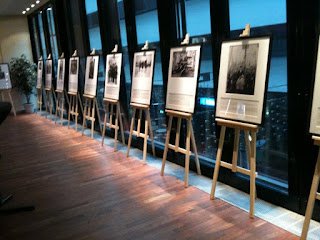 ("Pictures of Resistance" on display in Zurich, Switzerland)
Future exhibitions will be in Palm Beach Gardens, Miami, Atlanta , South Africa and Toronto. Toronto is Faye’s “hometown” and she will no doubt the star of the 2010 Yom HaShoah programming built around this exhibit.
In Israel, Faye explained to me how she came to live in Toronto. After the war people simply put their names on lists in the DP camps. Whatever place was willing to take you first is where you went. Faye is somewhat of a community treasure and local hero in Toronto, however she confided in my how she always wanted to live in Israel. JPEF is so honored to have been able to bring “Pictures of Resistance” to both of Faye’s “hometowns”. Yom Heuledit Sameach Faye !
Pictures of Resistance was made possible by: Thomas and Johanna Baruch, the Epstein/Roth Foundation, the Koret Foundation, the Charles and Lynn Schusterman Family Foundation the Taube Foundation for Jewish Life & culture, Diane and Howard Wohl, and the Holocaust Council of MetroWest.

Posted by Mitch Braff at 5:13 PM No comments: