“[M]y way of life and the reason for my life for many months have only been an effort to leap into humanity, to share its existence, hard or easy that it may be. If I did not act this way, I would be renouncing myself, I would remain without a guide, humiliated. And thereby I would also be renouncing you who have given me life and nourished me.”

–Gianfranco Sarfatti, an Italian Jew, writing to his parents about why he joined a partisan group.

Italian Jews like Sarfatti who joined resistance groups came from a wide spectrum of political, economic, religious, and social backgrounds. Eugenio Calo, the owner of a machine shop in Arezzo, joined a partisan group to avenge his wife and children, who were deported to Germany. Eugenio Colorni, a professor of philosophy in Milan, became the leader of a Roman resistance group. 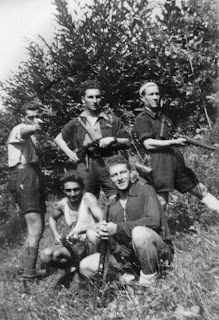 The Italian resistance groups that Jews were a part of were for the most part not founded on Jewish identity, but instead were integrated groups that readily accepted Jews to fight alongside them against a common enemy. Italian Jewish partisans were generally not deeply religious, with the exception of a small minority. However, there is evidence of religious life and observance of tradition: Augusto Segre, who was raised in a strict Jewish family, mentioned in his memoir of celebrating Yom Kippur during his time as a partisan.

As in other countries, the number of Jewish women who joined the Italian resistance groups was limited due to sexism. Conversely, they were viewed as less of a threat than their male counterparts, and thus could move around easier to gather crucial intelligence. Marisa Diena, who became the vice-commander of her unit, was a valuable asset for her group because her disarming appearance allowed her to ride through the countryside on her bicycle without arousing suspicion, gathering vital information from local informers along the way. 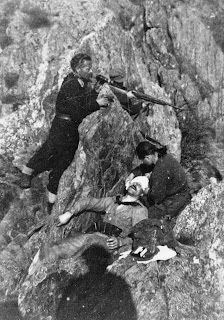 The emergence of Italian Jewish resistance was unique due to the facts surrounding the existence of the Fascist regime in Italy, whose leaders remained close allies of Hitler even after they were deposed and Italy surrendered to the Allies. On the fateful day of September 8, 1943, Italy was divided in half by the Armistice of Cassibile, which delegated the North to the German-backed regime and the South to the Allies. Though this agreement signified Italy's surrender and effectively cut its ties with the Axis, the end of fascism was not synonymous with the end of the war for Italy. A few months before in July, Mussolini had been arrested. However, the Germans staged a cunning raid to free the erstwhile dictator, and he became the figurehead leader of a fascist puppet regime in the north until his capture and execution by Italian partisans.

Following the September 8 armistice, Germany immediately annulled the contract it had created with Italy's Fascist government not to deport Italian Jews (who were located in Germany territory) to German-controlled land in the East. This malicious turn of events led to a surge in Jewish resistance, lasting until the end of the war.

The rise of anti-Fascist political resistance was an important precursor for the subsequent rise of armed resistance in Italy. The Giustizia e Liberta - a significant non-communist partisan group in Italy - was highly favored by the Allies, who provided it with material support. Due to its strong affiliation to well-respected Jewish resistance fighters, it was highly appealing to Jews who were looking to join partisan groups in Italy. 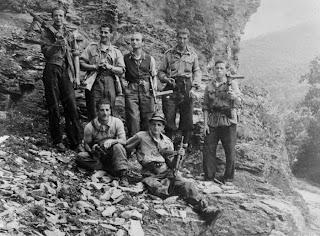 An important distinction for Italian Jews was their deep sense of Italian identity that was reflective of their wide assimilation into their Italian communities at large. Instead of exclusively identifying themselves as Jews, they instead formed alliances along political lines, notably supporters of fascism versus those against this agenda. Fighting in a resistance group allowed them to display their loyalty to their country as well as simultaneously advocating for their religious rights as a Jew.

To learn more about Italian Jewish resistance check out our website here: bit.ly/1sILNs6

Teaching Partisan Resistance; Translating the Lessons of Jewish Partisans into Student Led Efforts for Social Change| October 23, 2019 | The Jewish History Museum and Holocaust History Center, Tucson, AZ
Learn to teach about the resistance of the Jewish partisans and of the Warsaw Ghetto fighters. Engage and galvanize students by teaching about the 30,000 Jews, many of them teenagers, who fought back against the Nazis. Inspire students to address needs for change in their own communities with the true stories of the Warsaw Ghetto Uprising and other partisan efforts. For more information email: programs@jewishhistorymuseum.org